Whitehouse Scientific, a world-renowned producer of calibration microspheres  based in Chester, UK, recently opened its laboratory to a group of local primary school students, as part of their school’s design and technology week. Each team of six children enjoyed hands on experience  using a microscope, image analysis system and sieves as they learned how to analyse particles and prepare reference standards.  They learned first hand about the impact of particle properties in sand  as  they helped load a cement mixer.

Dr Graham Rideal, CEO of Whitehouse Scientific, said: “ To understand the relevance of particle size and shape, the children were asked to measure a range of particles; from cobbles stones, being laid in a new courtyard, to industrial diamonds for use in polishing high precision satellite lenses. These extremes of particle size provided the most excitement for the 11 year olds; the diamonds because they had never seen diamonds so small before and the cobble stones because of the loud bang when they were split with the 10 ton hydraulic rock splitter!”

Dr Rideal has long believed in the importance of promoting science in primary schools. This latest event follows a ten year history of involvement which began when his company built a local science trail, also aimed at school aged children.

Whitehouse Scientific is a leading producer of glass microspheres for calibration, and is the highest-ranking European certification laboratory for primary methods of particle size analysis. The company’s standards cover all particle-sizing techniques and nearly all the reference materials are NIST-traceable, ranging in size from 0.1 microns to 5.0 millimetres, and are available as single sizes or broad distribution standards. In addition, Whitehouse offers a unique calibration procedure for NIST-traceable measurement of filter apertures between 3 and 1000 microns, and produces general-purpose research grade microspheres. 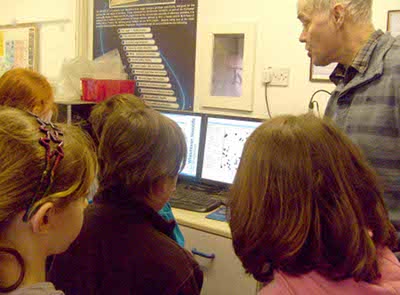