Sub-sampling of reference standards by users is not recommended because of the possibility of introducing errors and thus deviations from the certified size values. To avoid any need for this, the new set of 10 standards are packaged in weights from 5 to 20 gram. This makes them highly suitable for even the latest generation of image analysis systems, which require only relatively small amounts of sample.

External testing has produced results unsurpassed in any other similar particle sizing round robin. In particular, when the test data from manufacturers of image analysis systems were collated, the eight peak positions in a multimodal standard from 500 - 2000 microns could be superimposed, showing the very close agreement between instruments for these standards. 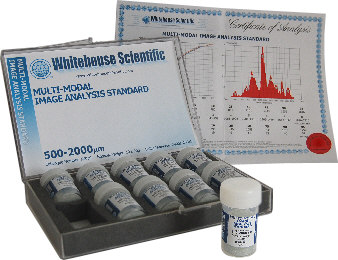